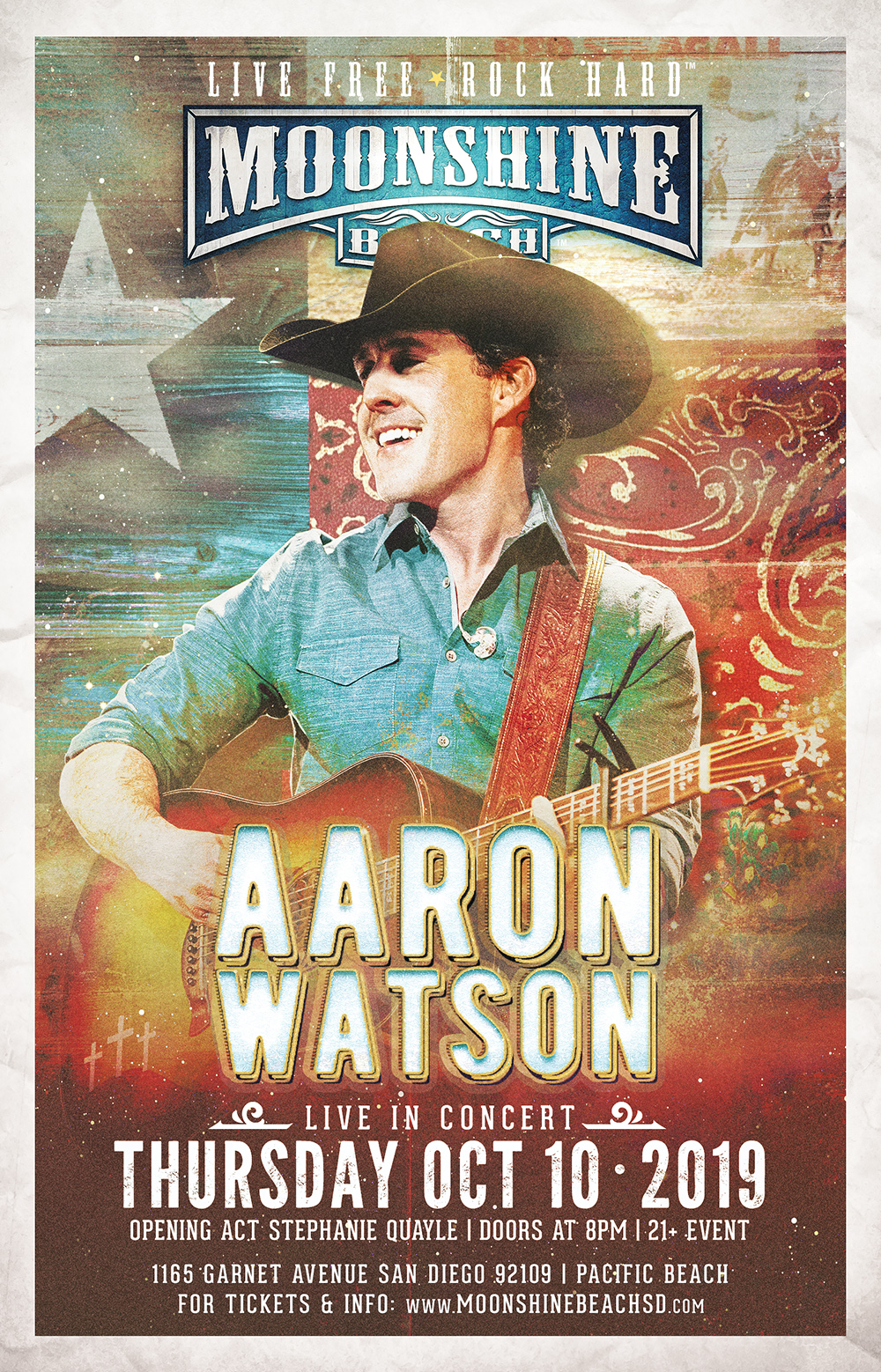 Aaron Watson continues to be "one of country music's biggest DIY success stories" (Forbes) with his latest effort, "Kiss That Girl Goodbye," the solely self-penned lead single from his forthcoming studio album. The lyrically driven, up-tempo percussive stunner is the first glimpse into Watson's brand-new project, Red Bandana.  Released June 21, 2019 on his own BIG Label Records and distributed by ADA Worldwide, the album debuted with over 11,000 total consumption, including more than 2 Million first week album streams, for the 20-song collection. Watson's last studio album Vaquero launched into the Top 10 on the Billboard 200 Albums chart with his biggest career sales debut to date, and at #2 on the Top Country Albums chart. Texas Monthly, Billboard, Rolling Stone Country, Noisey, CMT, The Boot and more have all featured the new music. Vaquero is the follow up to his history-making album, The Underdog, which debuted at #1 on the Billboard Top Country Albums chart, making him the first-ever independent, male country artist to debut in the coveted top spot. The album features "Outta Style," his record-breaking Top 10 and BMI award-winning hit on country music's national radio airplay charts and top 40 hit "Run Wild Horses."  Watson wrapped 2018 with two new projects, Live at the World's Biggest Rodeo Show, Watson's 14th album and his first live album in nearly a decade, and his first ever Christmas collection, An Aaron Watson Family Christmas. The singer/songwriter's rise has been paved by years of hard work and perseverance. Twenty years, over a dozen recorded albums, more than 2,500 shows in the U.S. and Europe, the Texas native is determined to stay true to his roots and deliver music directly to his fans. Watson shared his journey with fans via a video that has racked up over 7.2 Million views and 50,000 shares, proving his phenomenal connection to fans, watch HERE.

As a newly inducted member of CMT's Next Women of Country class of 2019, Stephanie Quayle is celebrating a breakthrough year in country music. The Rebel Engine Entertainment recording artist was one of the most active female artists with a consistent presence on the Billboard Country Airplay chart, official music video airplay on CMT and a vigorous performance schedule.  The singer-songwriter made her debut on both the Grand Ole Opry and historic Ryman Auditorium stages, along with hosting for Wrangler Network on the ACM Awards red carpet, as well as hosting for Sounds Like Nashville on the CMT Awards and CMA Awards red carpets. And in a once in a lifetime opportunity, she was the only indie act invited to perform for the five living former U.S. presidents (Obama, W. Bush, Clinton, H.W. Bush and Carter) as part of the hurricane relief concert "Deep From The Heart: The One America Appeal" in Texas. On the heels of releasing the special version of fan-favorite "Ugly (Far From Ugly Edition)" and music video to support the American Heart Association's Go Red For Women movement, Quayle is ready to share her much-anticipated new music. Quayle's new single, If I Was A Cowboy," charged out of the gates as a Top 10 Most Added song at Country radio (Mediabase) in its first week.  The new sound impacts the country music genre with an evolved sound that reflects her authentic western roots. Steeped in cowboy imagery and baritone guitar sonics, the Montana native is anxious to hit the road and share her music with her loyal fanbase known as the Flock Of Quayle and new listeners everywhere. "I grew up with cowboys -- always wanted to be one. This song highlights the toughness of the 'cowboy state of mind,' and as a Montana kid, I can't help but connect with the imagery," shares Quayle. "The feel and messaging are a really unique juxtaposition of vulnerability and strength. I think we all want to be a cowboy... if this isn't universal, it should be!" Co-written by Grammy-nominated hit songwriters Nicole Gallyon, Ross Copperman and Grammy-winning Shane McAnally, the song carries heavy lyrical weight. Quayle turned to Julian King, alongside executive producer and industry veteran Mark Wright, to produce the first taste of her forthcoming album (release date TBD). The trio have hit their stride in the studio blending baritone guitars with Quayle's warm and powerful vocals drawing inspiration from the Montana native's western roots. Named one of Rolling Stone Country's "Top Artists You Need To Know," Quayle is garnering attention from her high-energy live performances across the country while sharing stages with artists like Brett Eldredge, Jon Pardi, Carly Pearce, LoCASH, Billy Currington and more; her magnetic energy and booming personality grabs hold of audiences wherever she goes.   She has been highlighted in People, Huffington Post, Glamour, Hollywood Life, Inspirer Magazine, Taste Of Country and Sounds Like Nashville, to name a few. She also serves as music ambassador for Murdoch's Ranch & Home Supply, an original store from her hometown of Bozeman, MT, and has teamed up with national brands like Kampgrounds Of America (KOA), Winnebago, Wrangler, Polaroid and more throughout multiple campaigns. Quayle is just getting started.