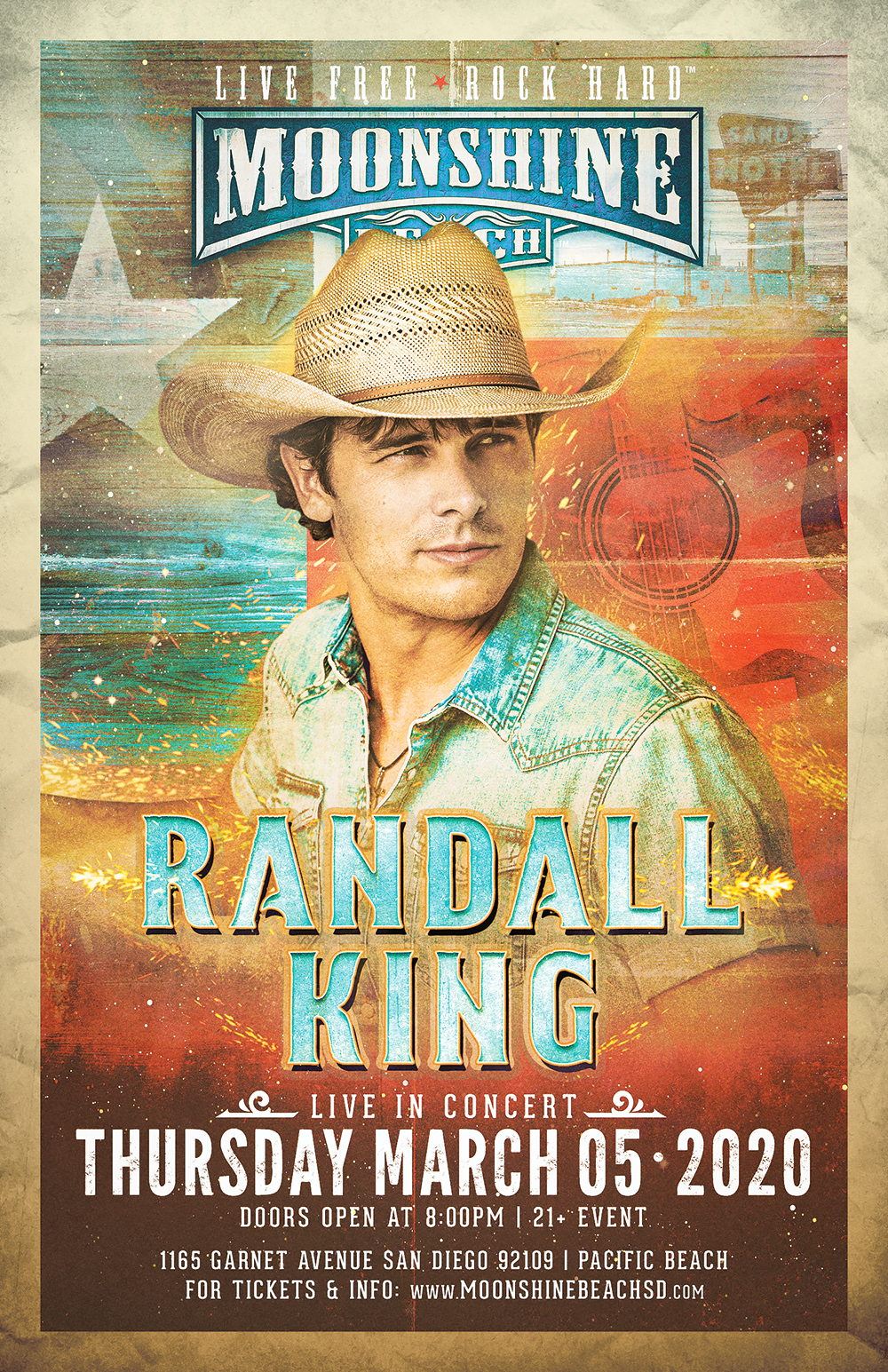 Humble beginnings, a cultivated work ethic and the influences of classic country legends, synchronized together in perfect harmony, make up singer-songwriter from the West Texas Plains, Randall King. Growing up a fourth generation hay-hauler, many of King's songs are written and inspired by his deep southern heritage and family roots. King was raised listening to the rich and soulful, classic country voices of Keith Whitley, George Strait and Alan Jackson, to name a few, which helped create King's musical style into what many have described as neo-traditional country. "Randall King remains to the heart and soul of country music, but no doubt brings his own unique brand to the genre," says hit songwriter Mark Nesler (co-writer of "Just To See You Smile" by Tim McGraw, "You Look Good In My Shirt" by Keith Urban). With a sound rooted in tradition and songwriting that showcases honesty, conviction and authenticity, King connects with fans on all emotional levels. "Randall King has a great voice that sounds classic, yet is fresh and as a songwriter he actually has something to say – be it something that touches your heart or something simple and fun that makes you wanna get out and raise some hell." said multi-award-winning and critically acclaimed singer-songwriter Anthony Smith (co-writer of "Run" & "Cowboys Like Us" by George Strait). Unlike the west Texas wind, King is a grounded and talented singer-songwriter who is sure to stay. "There's a lot of people that want country music to come back around, and there's a lot of people that will say you have to sell out and play radio hits to make it. I think for me I want to make my stamp as an artist with this record, that I can be me and still make an impact across the country.

His ears singled out The Beatles as his primary auditory nourishment during his early years. From ages 12 to 14, Crook almost exclusively listened to the greatest band of all-time. Supplemented by Motown soul singers like Marvin Gaye and Smokey Robinson, the early seeds of a later sound began to form. The Beatles classic, “If I Fell”, led Crook to put a guitar in his hands at the age of 12. While spending much of his youth in his home state of Texas, it was during an almost four year stretch in Hawaii where Crook began singing and writing his own music. After graduating from high school back in Texas in 2013, he soon moved to San Diego, prime to put his music on display for whomever was willing to listen. The work began in earnest. Crook played anywhere he could. From open mics to cafes to bars, his music could be heard anywhere someone was willing to let him play. His sound continued to develop. All the time spent listening to the music that very first inspired him as well as others like Bob Marley, Kendrick Lamar, John Mayer and Hank Williams, listeners developed their expectation of a Nick Crook song. Every artist wants their listeners to know what they are getting, even when their favorite artist tries something new. It took time, but Crook is at that moment. The industry has taken notice. Crook was the Grand Prize Winner of Heartbeat Music Academy’s Inaugural Live Your Dreams Talent Show in 2014, 2nd place winner at the Annual Singer/Songwriter Competition at the San Diego County Fair and the winner of Gigtown’s Jingle Contest, both in 2015. Winning the jingle contest gave Nick the opportunity to play for arriving guests at the private annual charity event Rock The Cure, where he was the opening act for the legendary Steve Miller of the Steve Miller Band. Miller listened to one of Nick’s own songs, which he referred to as a “smart song which was written and performed beautifully.” Nick went on to perform again in 2016's Singer/Songwriter Competition at the County Fair, in which he took 3rd. Nick continues to write, play, sing and perform wherever and whenever he can. His passion for his craft continues to shine through all of the music he produces. He's thankful to all those who have supported him on his journey. He is happy and blessed to bring all of his heart and soul to his many listeners. He just wants to make good music…