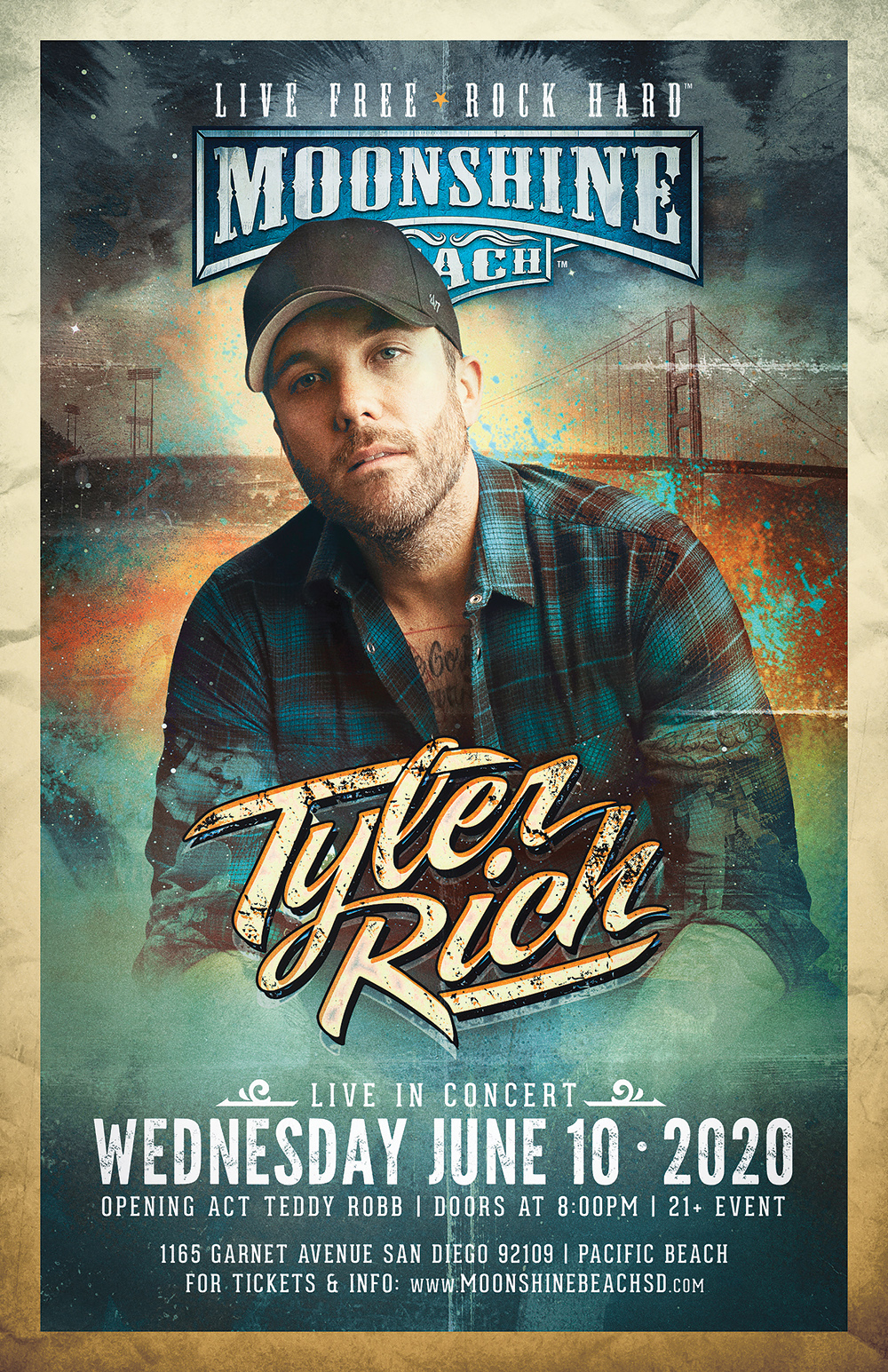 Rather Be Us Tour

Raised in Northern California, Tyler Rich found his love of music gathered around a Christmas tree alongside family singing holiday classics and Creedence Clearwater Revival. Fast forward to graduating college with a degree in Economics, Tyler moved to LA to pursue a different game of numbers – music – exploring various genres with songwriting and bands before taking the leap as a solo artist. His fanbase has grown organically from Sacramento to Nashville where in 2017 he signed a record deal with The Valory Music Co. and publishing agreement with Big Machine Music. While introducing his amplified sound and infectious energy coast to coast, the 2018 CMT Listen Up and 2019 Pandora Artist to Watch become a road warrior performing alongside some of the genre's top acts including Dustin Lynch, Sam Hunt, Brett Eldredge, Justin Moore, Cole Swindell, Dan + Shay, Brett Young and Jon Pardi. Enlisting Tyler as one of their "10 New Country Artists You Need to Know, Rolling Stone touts him as "the newest member of country music's radio-minded incoming class, with a homecoming king's swagger and a valedictorian's songwriting smarts." Tyler's back-to-back No. 1 hits on SiriusXM – "The Difference" and "Leave Her Wild" – were inspired by his newlywed wife model/actress Sabina Gadecki. People explored how Tyler went from "From Red Robin to Hitting No. 1," penning his own music and Backstreet Boys AJ McLean's single "Night Visions." His charm and fresh sound have cumulated 155M+ streams to date as Tyler readies to return to the studio. He's just released "Rather Be Us,"  a track written alongside Brad Tursi and Lindsay Rimes. Wrapping a headline club run in Europe this fall, Tyler will next hit the road as support on LANCO's What I See Tour at the start of 2020. Visit TylerRich.com for additional tour dates.

Perfecting his craft in Rocky Mountain ski lodges and Nashville's Honky Tonks, Teddy Robb has a laid back voice that grabs you like the Colorado winter air and wraps you up in a blanket with someone you love next to a warm fire. A native of Akron, Ohio, Teddy grew up loving the outdoors. He fished, hiked, and played football through college at Kent State.  It was during college when his passion turned to music the moment he heard George Strait's "Troubadour".  That was it, the decision was made.  He called his parents, packed his bags and hit the road.  Teddy spent time in Vail playing music to support his snowboarding habit before making the final move to Nashville. Teddy's debut track "Lead Me On," was co-written with Ryan Beaver, Matt McGinn and Aaron Eshuis. His second offering, "Really Shouldn't Drink Around You" was written by GRAMMY Award-winning songwriters Shane McAnally and Josh Osborne, along with chart-topping songwriter and Old Dominion bandmember, Trevor Rosen. Teddy's third track, "Tell Me How," was co-written by Teddy, Blake Chaffin, Aaron Eshuis.