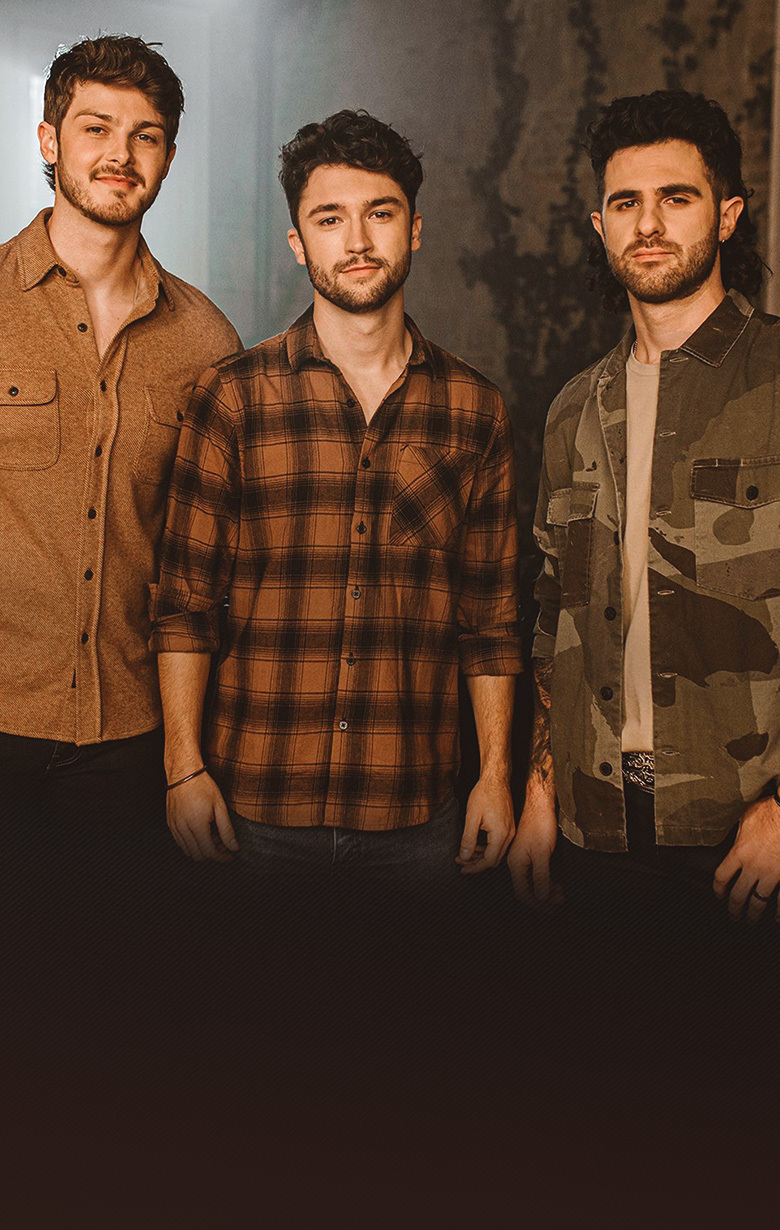 VIP EXPERIENCE & GA TICKETS ON SALE NOW!
21+ Event Only For questions regarding the VIP packages please reach out to help@please.co.

Made up of three different but complementary voices, Restless Road is a powerhouse country band with one of the most auspicious breakout stories of 2020. Praised by People, Taste of Country, Billboard and more, the trio's powerhouse harmonies and soul-baring lyrics put them on numerous 2021 "Ones to Watch" lists, as members Zach Beeken, Colton Pack, and Garrett Nichols continue to rack up millions of on-demand streams. As NBC's Today Show host Hoda Kotb put it: "That harmony…you feel it in your soul." Since Zach and Colton joined forces after meeting on a singing competition (where they met future collaborator Kane Brown), Restless Road has stood out as a vocal force in a genre increasingly defined more by its production than its voices. When Garrett came onboard in 2015, they knew they had something special. In February 2020, the trio unveiled their debut self-titled EP, which includes "Take Me Home," featuring Kane Brown. A short year later, they dropped "Took One Look At Her Momma," which American Songwriter praised for its "captivating melody and lyrics that those in a relationship could benefit from hearing." Restless Road recently earned themselves the opening slot of Kane Brown's "Blessed & Free Tour," which runs from October 2021 to February 2022. With all signs indicating Restless Road is a contender for best new vocal group, its members continue to write, sing, and perform together as they take the next steps down country music's long and winding road. Greylan James At just 5 years old, Greylan James’ papaw gifted him his first guitar. From that moment on, whenever anyone would ask what he wanted to do in life, he responded, “I’m going to be a Country Music star.” Shortly thereafter, Greylan met his hometown hero, Kenny Chesney, who told him to “stay in school and learn how to write songs” - which is exactly what he did. The Knoxville, Tennessee native moved to Nashville to pursue his first major publishing deal when he was just 18 years old.  In 2018, Universal Music Publishing Group (UMPG) signed Greylan to a global publishing deal. He was featured on NBC’s The Voice and ranked one of the best guitarists in the world under 21 by Guitar Center Magazine’s Brotherhood of the Guitar Top 100. “I write songs about the stories from my life and the stories I’ve seen others live. I just want anyone who’s listening to my music to be able to relate to them,” Greylan says. Greylan has written songs for some of Country Music’s most notable artists, such as Chris Young, Blake Shelton and Chris Janson. In 2020, he received a phone call from Chesney who let him know that he was cutting Greylan’s song “Happy Does.” Keep an eye on this rising country singer-songwriter as he begins releasing his own music in 2021.